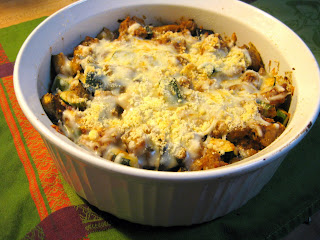 I hadn't cooked anything inspired by Italian cuisine for a while, so tonight I decided to make a vegetable-laden casserole. I first had the idea to grill the vegetables, but I took an easier route by roasting the vegetables to develop their sweet flavor and some caramelization. I also used one of my favorite proteins, which is lean turkey Italian sausage, which has all the flavor of pork sausage but a lot less fat. Because this casserole doesn't have pasta in it, this would be great for those on a low-carb diet. I especially think it would be great for those low-carbers who happen to have a pizza or pasta craving because it has all the flavor of those two dishes without the grains. If you have children, this would be a nice way to get them to eat vegetables because you have sausage (which I loved as a kid) and everything is covered with just enough cheese to give a nice salty bite. I think kids enjoy some stringy, melty mozzarella cheese, too (I'm an adult and I still love melty cheese!)

Kind of along the same lines of this topic, when I was picking out marinara sauce to use, I decided to read the labels and was really surprised at how many of them contain corn syrup. I really don't understand why corn syrup needs to be in something like marinara sauce (I saw it as an ingredient in my former favorite store-bought hummus and stopped buying that...it just sounds gross to me for corn syrup to be in a bean dip)! I saw advertisements last year about how corn syrup is made from all-natural corn and it has just as many calories as sugar, but I find this information to be misleading. As I have read in Michael Pollan's In Defense of Food, the corn used in corn syrup it's even digestible by humans until it's processed into corn syrup. This topic relates to something I read in the magazine Woman's Heath (March 2010) where it talks about high-fructose corn syrup being an obesogen. I had never heard of obesogens until I read this article, but these are chemicals that act as fat-building catalysts in the body. This information was taken from the book The New American Diet by Stephen Perrine and Heather Hurlock. High-fructose corn syrup contains a lot of calories, so if you cut this ingredient from your diet, you will not only cut calories, but also be cutting a potential fat-building catalyst in the body. Yet another reason to read your labels when shopping!

The whole point of telling you about obesogens is basically to present another reason why eating as close to natural, whole foods is important. I used whole vegetables and pasta sauce with real, natural ingredients. As others have said before, if you can't pronounce and ingredient, don't buy it. I hope you enjoy this healthy, low-carb casserole as much as I did...keeping in mind how you're doing your body good by eating whole foods. 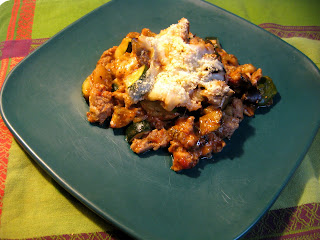 1. Preheat oven to 400 degrees F.
2. Line a baking sheet with aluminum foil (for easy clean-up) and spray the pan with cooking spray.
3. Toss the eggplant and zucchini with the olive oil and some salt and pepper and put them on the sheet.
4. Bake for 30 minutes, tossing once in between the cooking time, until the vegetables are browned and tender.
5. Meanwhile, heat a medium skillet over medium heat. Spray with cooking spray and add the onion, garlic, sausage, basil, and oregano and cook until the onion is soft and the meat is tender. Stir in the marinara and allow the mixture to heat through.
6. Spray a 2-qt casserole dish with cooking spray. Mix the sausage mixture with the roasted vegetables. Layer half of the vegetables in the dish, then half the cheese, then the rest of the vegetables and finish with the cheese.
7. Bake the casserole until the cheese melts, about 20 minutes. Allow the casserole to rest 5 minutes before serving.